Climate change remains one of the most important challenges facing humanity. It affects every country and disrupts national economies and affects lives, costing people, communities and countries significantly today and in the future. In addition, there is also a significant inequity between countries' emissions and impacts, meaning that often those who contribute to climate change the least, suffer from it the most. People are experiencing the growing impacts of climate change, which include changing weather patterns, rising sea level, and more extreme weather events.

It is now accepted unequivocally that climate change takes place and is caused by the greenhouse gas (GHG) emissions released to the atmosphere as a result of human activities (Inter-governmental Panel on Climate Change [IPCC],Climate Change 2013: The Physical Science Basis. These emissions are changing the chemical composition of the atmosphere with increased concentration of three main gases: carbon dioxide (CO2), methane (CH4) and nitrous oxide (N2O). According to the IPCC report on the Physical Science Basis which covers the period 2000-2010, the atmospheric concentrations of CO2 have increased by 40% and of CH4 by 150% since pre-industrial times. These amounts have further increased since then.

Building on the United Nations Framework Convention on Climate Change (UNFCCC) and the Kyoto Protocol, Parties reached a new universal agreement in Paris, in 2015, to reduce emissions, keep global warming to 2oC below pre-industrial levels (i.e. about 1850) and mobilize resources to finance adaptation, as societies move towards a low-carbon economy base. The session and its outcome, the Paris Agreement, were of critical importance, given that it was the first time that all countries have agreed to GHG reductions in their national economies, not only those listed in Annex I Parties of the UNFCCC. The landmark Paris Agreement sets the path to enable humanity to combat climate change and boost the transition towards resilient, low-carbon societies and economies around the globe. The agreement includes provisions on mitigation, adaptation and capacity-building that directly relate to the information going forward and addresses the capacity-building needs of developing countries, least developed countries and small island developing States.

There was no underlying framework linking the reporting requirements stemming from the Paris Agreement and the necessary statistics or indicators to support climate policy action. The science and policy framework developed by IPCC summarises the complexity of climate change as a sequence of events: drivers, impacts, vulnerability, mitigation and adaptation, however internationally applicable indicators and statistics needed more attention. On the other hand, many countries produce statistics and indicators across these areas in all possible ways. Therefore, a statistical framework was needed both to streamline international reporting and better inform national climate change policies.

Currently, only GHG reporting (part of drivers and mitigation) is standardized (in the IPCC 2006 guidelines). The areas of adaptation and vulnerability to climate change are particularly challenging to express in internationally comparable and agreed indicators. The United Nations Statistics Division (UNSD) published the Framework for the Development of Environment Statistics (FDES 2013), which addresses climate change as a cross-cutting theme in Chapter 5. The chapter provides a set of environmental topics and individual statistics based on the IPCC framework that are important when informing any country on climate change. 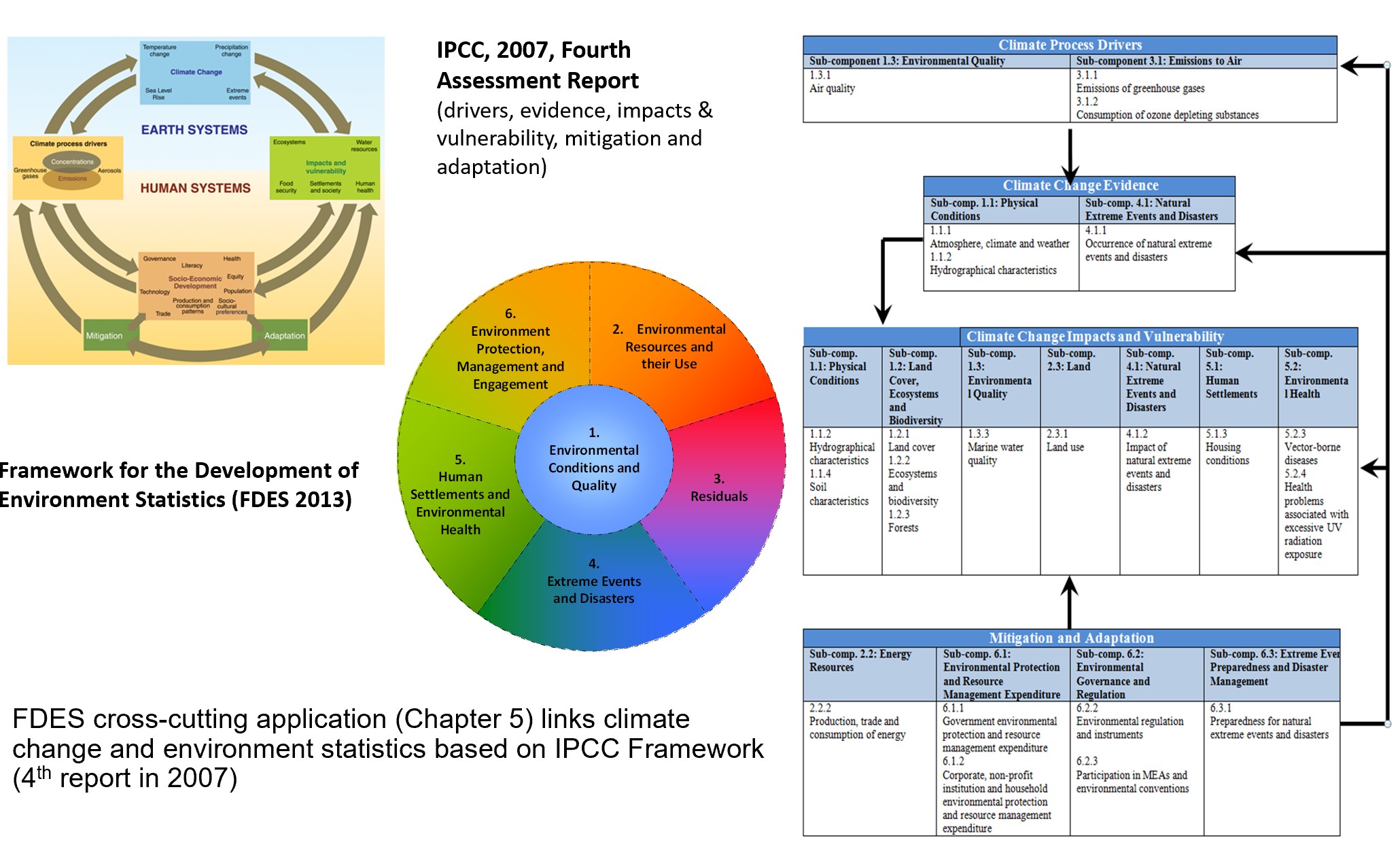 Accurate statistics on climate change drivers, impacts, vulnerability, mitigation and adaptation are of critical importance to support global environmental policies, foremost on climate change and ocean acidification abatement; likewise, for regional and nationally relevant policies, for example carbon sequestration enhancement policies (REDD+), urban air quality improvement, etc. At present, the availability of relevant statistics in most countries varies across the above mentioned five areas. UNSD in collaboration with the United Nations Framework Convention on Climate Change (UNFCCC) and other international bodies, as well as the Expert Group on Environment Statistics (EGES) has developed the Global Set of Climate Change Statistics and Indicators based on a systematic review of country-based practices and close link between global climate change negotiations and reporting and national statistics.

The United Nations Statistics Division (UNSD) received a mandate from the Statistical Commission at its 47th session in 2016 to, inter alia, develop a Global Set of Climate Change Statistics and Indicators applicable to countries at various stages of development. In addition, it was recommended at the 49th session in 2018 that UNSD and UNFCCC should strengthen the link between statistics and policy by undertaking joint initiatives in the development of climate change statistics and indicators, encouraging joint capacity-building efforts and training with other partners and exploring ways to encourage national statistical offices to be more involved in the preparation of data submissions to UNFCCC.

The Expert Group on Environment Statistics (EGES) has been contributing to the work on the draft set through the review of iterative versions and discussions at Expert Group meetings. At its sixth meeting in May 2019, it was agreed that UNSD share the draft set of climate change statistics and indicators with interested experts of the EGES, before conducting the current Pilot Survey. The expert review was completed in January 2020 based on feedback from six countries and four international and regional organizations. As a result of the review, 133 statistics and indicators were compiled in a draft Global Set for the Pilot Survey. The Pilot Survey was sent to 42 selected countries and 30 international/regional organizations that have participated in this work through different processes such as the EGES, regional or national workshops.

The Pilot Survey was launched on 23 February 2020 with a main objective to test and assess the relevance, soundness and measurability of the proposed indicators by inviting: (1) the NSOs and/or ministries of environment from 42 countries to assess their preparedness to compile the suggested indicators in collaboration with relevant partners according to their national priorities as well as the development stage of the country; and (2) thirty international/regional organizations to assess the indicators from a thematic and methodological point of view to ensure that the selected indicators are relevant, correctly named, and supported by definitions, references and data.
read more

UNSD launched a Global Consultation on the draft Global Set of Climate Change Statistics and Indicators on 21 May 2021. As mandated by the Statistical Commission at its 47th session in 2016, the draft Global Set was developed in close collaboration with the United Nations Framework Convention on Climate Change (UNFCCC), and is applicable to countries at various stages of development. All UN member states were invited to take part in the Global Consultation. In addition, a number of agencies were consulted, based on their expertise in climate change statistics and indicators.
read more

The responses and feedback from the Global Consultation were summarized and presented to the EGES at its eighth meeting, in October 2021, for review and discussion. Group work sessions were organized in which UNSD outlined the following key issues that the EGES was expected to review (in addition to other issues of a more specialized nature, which UNSD is further addressing bilaterally with specialized agencies): suggestions for including new indicators in the Global Set of Climate Change Statistics and Indicators; suggestions for modifying some of the existing statistics and indicators; and some examples of tier 3 indicators that require the development of new methods. As a result of these sessions, 13 new indicators were approved for inclusion in the Global Set, and 7 indicators and statistics were modified. Based on the feedback from the Global Consultation, the review by the EGES and bilateral consultations, several indicators and statistics were consequently improved or added in several thematic areas, including the consideration of gender (the role of women), the impact of disasters and their costs, biodiversity, energy and greenhouse gas emissions.

Considering the extensive Global Consultation, as well the country presentations, plenary discussions and group work during the meeting, the EGES recommended that the Global Set of Climate Change Statistics and Indicators be submitted to the Statistical Commission at its fifty-third session, in 2022, for adoption.