Implementation of Goal 15 is showing some encouraging signs. Forest loss has slowed. A growing number of forest areas are being sustainably managed, integrating policies and practices that protect forest ecosystems and address drivers of degradation. All regions continue to make progress on conferring official protection status to areas critical to global biodiversity. However, land degradation is increasing due to competing pressures for food, energy and shelter. Biodiversity loss is occurring at an alarming rate. In addition, invasive species, the illicit poaching and trafficking of wildlife, and falling trends in ODA in support of biodiversity continue to thwart efforts to protect and restore vital ecosystems and species. Accelerated action is urgently needed to preserve and promote the sustainable use of ecosystems on which all life depends. 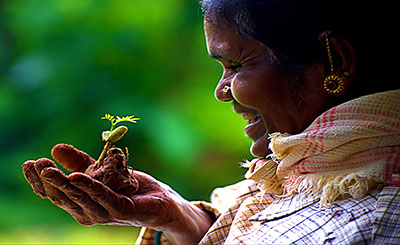 The Earth’s forest areas continue to shrink, down from 4.1 billion hectares in 2000 (31.2 per cent of total land area) to about 4 billion hectares (30.7 per cent of total land area) in 2015. The loss of forests has been uneven across regions, with the most dramatic declines occurring in sub-Saharan Africa, South-Eastern Asia and Latin America. This is primarily due to the conversion of forest to agricultural land, which is responsible for an estimated 73 per cent of forest loss in tropical and subtropical regions. Despite the decline in forest area, the rate of forest loss has dropped by 25 per cent since the period 2000–2005.

Sustainable forest management has demonstrated positive results in combating the continued loss of forests. Encouragingly, more land has been designated as permanent forest areas, coupled with planning, monitoring and stakeholder engagement and adoption of legal frameworks for sustainable forest management. Globally, the proportion of protected forest areas and forests under long-term management plans is increasing. Moreover, 2017 data show a positive global trend in forest areas that have been independently certified as sustainably managed, with increases in most regions. However, deforestation and forest degradation are still concerns in some regions, particularly tropical regions, pointing to the need to fully implement sustainable forest- and land- management practices.

More areas critical to global biodiversity are being protected

Areas critical to global biological diversity are known as key biodiversity areas (KBAs). The proportion of KBAs covered by protected areas continues to increase in freshwater, terrestrial and mountain ecosystems. On average, for all three types of ecosystems, the proportion of KBAs covered by protected areas increased by more than 10 percentage points from 2000 to 2018. Europe and Northern America has the highest average coverage of protected freshwater, terrestrial and mountain KBAs (at 55 per cent, 63 per cent and 68 per cent, respectively). This region also has the highest annual average growth rates for terrestrial and freshwater KBAs that are protected. Oceania has the fastest annual average growth rate for mountain KBAs covered by protected areas (at 1 per cent annually) and has seen the largest overall increase since 2000 (19 per cent). The protection of KBAs safeguards critical natural capital and ecosystem functions that support human well-being and enhance the resiliency of communities.

Average proportion of each freshwater, terrestrial and mountain KBA that is covered by protected areas, 2000–2018 (percentage)


Land degradation threatens the livelihoods of over one billion people

The degradation of soil and land continues due to heightened competition for land use, undermining the security and development of all countries. From 1999 to 2013, approximately one fifth of the Earth’s land surface covered by vegetation showed persistent and declining trends in productivity, primarily due to land and water use and management. Up to 24 million square kilometres of land are affected (an area the size of China, India and the United States of America combined), including 19 per cent cropland, 16 per cent forest land, 19 per cent grassland and 28 per cent rangeland. For grasslands and rangelands, the global extent of areas experiencing declining productivity exceeds those showing increases. South America and Africa are most affected by diminished productivity: in some dryland areas, advanced stages of land degradation are leading to desertification. Reversing these worrying trends through sustainable land management is key to improving the livelihoods and resilience of over 1 billion people inhabiting degraded lands.

Note: The map shows five classes of persistent land productivity trajectories over the period 1999–2013. Land productivity is an essential variable for detecting and monitoring active land transformations typically associated with land degradation processes. It can be expressed as an equivalent of terrestrial net primary productivity per unit of area and time, and reflects the overall capacity of land to support biodiversity and provide ecosystem services.


Action to combat invasive species is intensifying, though they remain a major contributor to biodiversity loss

Invasive alien species, including plants, animals, fungi and microorganisms, are recognized as one of the most serious causes of biodiversity loss and decline, after habitat loss. The impact is most severe for small island developing States. In response, the number of countries that have enacted national legislation to prevent and manage the spread of such species has increased by 19 per cent since 2010. Moreover, three quarters of countries that are party to the Convention on Biological Diversity have included relevant targets in their national biodiversity strategies. Over 88 per cent of 81 countries surveyed have a government department or national agency responsible for managing invasive species. However, over a third of these countries have no allocated budget for this effort and have not accessed any global mechanism to seek funding. To compound the problem, the overall rate of biological invasions shows no sign of slowing down, with growth in both the number of invasive species and their spread due to increased trade and transport.