Recent advances in sustainable energy are encouraging signs for ensuring access to affordable, reliable and modern energy for all. Access to electricity is outpacing population growth in many countries. In addition, energy efficiency continues to improve, which is offsetting carbon dioxide emissions, reducing energy demand and making energy more affordable. Although renewable energy in the electricity sector has advanced rapidly, accelerated progress is also needed in the areas of transport, heating and cooling. Despite some steps forward, 41 per cent of the world’s population still lack access to clean cooking fuels and technologies. Overall, progress on Goal 7 remains too slow to be on track to meet the global energy targets for 2030. 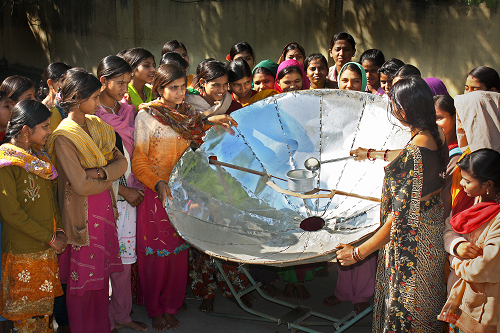 The share of renewables in final energy consumption increased modestly, from 17.3 per cent in 2014 to 17.5 per cent in 2015. Only 55 per cent of the renewable share was derived from modern forms of renewable energy. The remainder represents traditional uses of biomass (such as fuelwood and charcoal), of which a significant proportion is used by the 3 billion people still using polluting cookstoves. In absolute terms, renewable energy consumption grew by 18 per cent from 2000 to 2015. In 2015, electricity accounted for half of the increase (mostly from wind and solar energy); the other half was mostly bioenergy for heat and transport. Based on the current trend, the share of renewable energy in total energy consumption is projected to reach just 21 per cent by 2030, falling short of the substantial increase called for in the SDG target.

Global energy intensity—the ratio of energy used per unit of GDP—decreased by 2.8 per cent in 2015, faster than in any year since 1990 and double the rate of improvement between 1990 and 2010. High-income countries showed consistent declines, but at a slower pace than low- and middle-income countries. Emerging economies in Asia and the Pacific and in Africa have now surpassed the global rate of improvement in energy intensity, but their intensity levels are higher than the world average. Among end-use sectors, industry made significant progress, reducing intensity by 4.2 per cent in 2015. To reach the SDG target, global energy intensity needs to improve at an annual rate of 2.7 per cent over the period 2016–2030, requiring sustained momentum and the systematic adoption of energy efficiency policies in countries that are falling behind.


Vast swaths of Africa and Asia are still without electricity, although progress is being made


From 2000 to 2016, the proportion of the global population with access to electricity increased by almost ten percentage points, reaching 87 per cent. This was the first time since 1990 that the absolute number of people living without electricity dipped below the symbolic threshold of one billion. Substantial gains in access rates were achieved in rural areas, in part due to slower population growth, but also aided by an upswing in off-grid solar electricity. Still, access rates to electricity in rural areas (at 76 per cent) are much lower than in urban areas (97 per cent), and rural residents make up 87 per cent of the global deficit in access.


The largest deficits in electricity are found in Southern Asia and sub-Saharan Africa. However, both regions have made substantial progress. From 2000 to 2016, the electricity access rate increased from 60 per cent to 86 per cent in Southern Asia and from 26 per cent to 43 per cent in sub-Saharan Africa. Despite these promising developments, the outlook for electrification shows that the world is not yet on track to achieve universal access by 2030. Some 40 countries have met the target since 2010; another 98 countries will need to intensify their efforts to do so.

The health and well-being of some 3 billion people are adversely impacted by the lack of clean cooking fuels. This is especially true for women and children, who are typically the main procurers and users of household energy. Sub-Saharan Africa, Oceania* and many parts of Asia have the largest populations using polluting fuels. In 2016, some 2.8 billion people still used solid fuels with inefficient stoves, leading to high levels of household air pollution. If current trends continue, 2.3 billion people will continue to use traditional cooking methods in 2030. The solution lies in transitioning to cleaner fuels and technologies, like gas and electricity, and improvements in stove efficiency. Addressing issues of affordability, lack of consumer awareness about the benefits of clean cooking, and minimal financing for producers of clean cooking energy technologies are key to accelerating the rate of access to clean cooking.