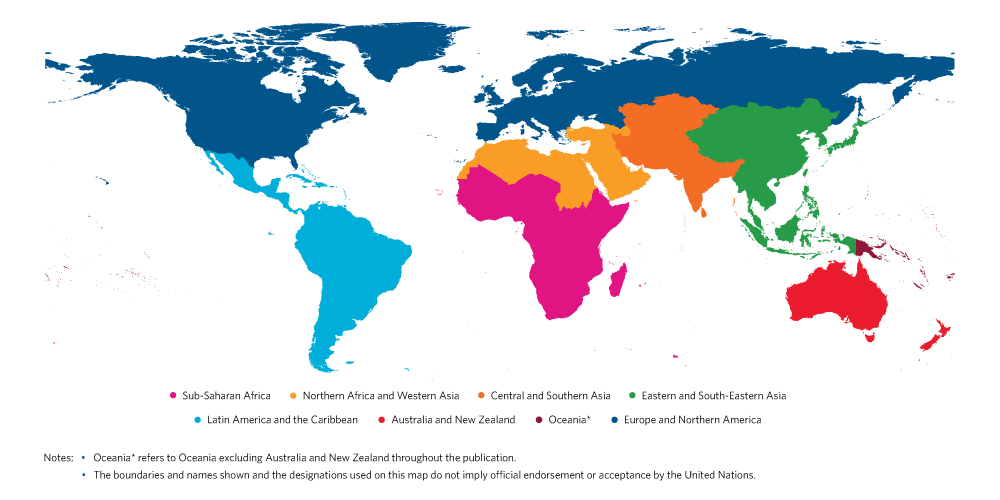 This report presents data on progress made towards achieving the Sustainable Development Goals worldwide and by various groups. The country groupings are based on the geographic regions defined under the Standard Country or Area Codes for Statistical Use (known as M49)5 of the United Nations Statistics Division. The geographic regions are shown on the map above. For the purpose of presentation, some of the M49 regions have been combined.

The use of geographic regions as the basis for country groupings is a major change from The Sustainable Development Goals Report 2016 and the progress reports on the Millennium Development Goals. Previously, data were presented for countries in "developed" regions and countries in "developing" regions, which were further broken down into geographic subregions. Although there is no established convention for the designation of "developed" and "developing" countries or areas in the United Nations system, data for some indicators in this report are still being presented for developed and developing regions and countries for the purpose of statistical analysis only, and are based on the practice employed by the international agencies that provided the data. 6

In addition, the text and figures present, to the extent possible, data for least developed countries, landlocked developing countries and small island developing States, which are country groups requiring special attention. A complete list of countries included in each region and subregion and country group is available at https:// unstats.un.org/sdgs/indicators/regional-groups.

The designations employed and the presentation of the material in this publication do not imply the expression of any opinion whatsoever on the part of the United Nations concerning the legal status of any country, territory, city or area or of its authorities, or concerning the delimitation of its frontiers or boundaries.

5 Full details of the M49 standard can be found on the Statistics Division website at https://unstats.un.org/unsd/methodology/m49 .

6 A discussion note, "Update of the regional groupings for the SDG report and database", of 31 October 2016 describes the details of this change and is available at https://unstats.un.org/sdgs/indicators/regional-groups.