6.18.        Data sources. The organization of data collection with respect to different territorial elements requires a careful selection of the most appropriate data sources and depends on national circumstances and priorities. Table VI.1 presents an overview of the main data sources and approaches to the organization of data collection under the general and special trade systems. It should be reiterated that IMTS 2010 (para.2.20) recommends that countries apply the general trade system, as general imports provide the most comprehensive record of the goods entering the economic territory of a compiling country and increasing the stock of its material resources, while general exports provide the most comprehensive record of the goods leaving its territory and thus decreasing that stock. However, many countries continue to apply the special system for both imports and exports (or may even apply one system for imports and the other for exports). Details on the specific data sources and on the organization of data collection are provided throughout this Manual but, in particular, in chapters I to V and VII.

6.19.        Moving to the general trade system. Owing to the lack of territorial coverage and the lack of uniformity in the application of the special trade system, countries using this system are encouraged to develop plans to introduce the general trade system, under which the statistical territory coincides with the economic territory (IMTS 2010, para. 2.28). When regular customs records are not available for certain territorial elements of the economic territory, additional data sources may be required (see table VI.1). Such sources could be surveys of free zone operators or enterprise surveys (see chaps. III and IV for details on non-customs sources). However, such surveys are, in general, costly and put a significant burden on respondents. Therefore, preference should be given to the use of administrative records of customs or other entities that monitor the trade related to these specific zones for security and other reasons. However, this information may not be of sufficient quality or it might be difficult to merge or reconcile that information with the trade data that are obtained from customs declarations (see chap. VII for further information on the compilation of international merchandise trade statistics from different sources). However, it is good practice for countries that follow the special trade system to explore the possibility of including in the statistical territory, territorial elements that are currently not included, if the trade related to these territorial elements is significant. 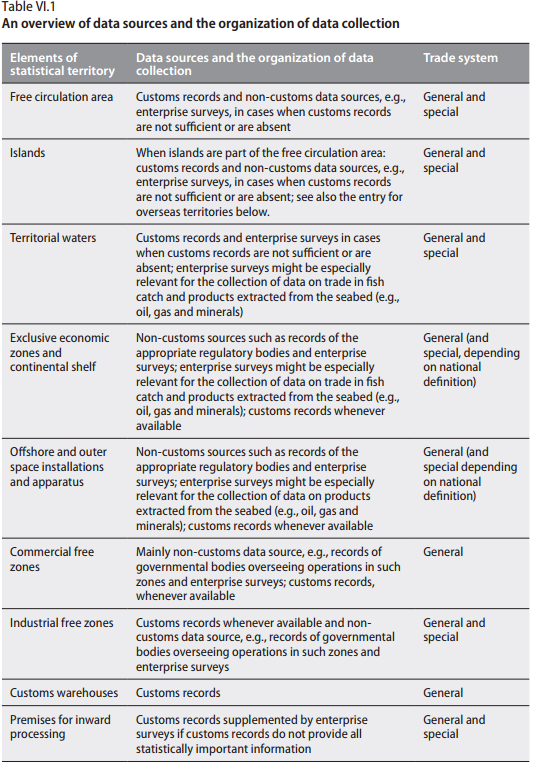 a. See IMTS 2010, para. 1.49 (c). However, trade between a country’s enclaves and countries different from the host country are to be included under the general and special trade systems (assuming that these enclaves are considered part of the elements included under the special system) if such trade is of significant scale, as determined by the compiling country’s statistical authority.