Who Procues for Whom in the World Economy?

WHO PRODUCES FOR WHOM IN THE WORLD ECONOMY?For nearly two decades, the share of trade in inputs, also called vertical trade, has dramatically increased. This paper suggests a new measure of international trade: “value-added trade”. Like many existing estimates, “value-added trade” is net of double-counted vertical trade. It also reallocate trade flows to their original input-producing industries and countries and allows to answer the question “who produces for whom”. In 2004, 27% of international trade were "only" vertical specialization trade. The sector repartition of value-added trade is very different from the sector repartition of standard trade. Value-added trade is less regionalized than standard trade.see attachment. 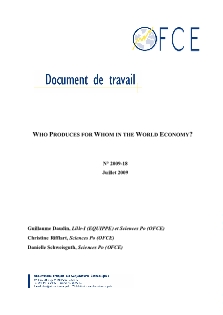