IMTS: Supplement to the Compiler's Manual (2008)

IMTS: Supplement to the Compiler's Manual (2008)
The International Merchandise Trade Statistics: Supplement to the Compilers Manual has been prepared with the support of the inter-agency Task Force on International Merchandise Trade Statistics (TFIMTS) as agreed at its 2003 meeting in Geneva, Switzerland. The primary purpose of the Supplement is to assist United Nations Member States in the implementation of the guidelines adopted by the United Nations Statistical Commission and laid out in International Merchandise Trade Statistics: Concepts and Definitions, Revision 2 (IMTS, Rev.2 ) and International Merchandise Trade Statistics: Compilers Manual. The Supplement may also serve as a guide to users who wish to understand trade data's nature better.The Supplement covers a number of topics deemed to be beneficial to trade data compilers, including an overview of compiling practices, the revised International Convention on the simplification and harmonization of customs procedures (revised Kyoto Convention), the 2007 edition of the Harmonized Commodity Description, and Coding System, specific compilation issues such as goods for processing and re-exports, an overview of the differences between IMTS and general merchandise in the balance of payments statistics, the lessons learned from the Intrastat system of the European Union, and the topic of linking trade and business statistics.The Supplement is directed to all institutions which play a role in the collection, compilation, and dissemination of trade statistics - the term “compiler” as used in the Supplement refers to those institutions. It recognizes that customs departments around the world are the primary producers of basic data on trade transactions. In contrast, national statistical offices are mostly responsible for processing and dissemination of the trade statistics. Much of the text is written in respect of individual countries or areas. However, as customs unions have become more prevalent in recent years, a separate chapter has been explicitly added to collect data within a customs union.The printed version of Supplement to the Compilers Manual is available at:https://unp.un.org/Details.aspx?pid=17694 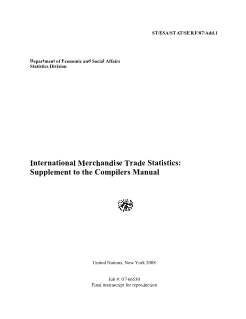 No files shared here yet.