Q:
I have been using the UN Comtrade to track the trade of natural rubber latex trade (HS Code 400110) for various countries. In the past three years a problem has been noted for Germany. The data states more trade than reported by the rubber traders, and there is also some discrepancies in the trade data themselves and with the Eurostat. I have attached an excel worksheet with the data set.The questions that I would like to ask are the following:- Large overall discrepancy between the UNComtrade and the Eurostat for 2004 (UNComtrade – Eurostat sheet). The large discrepancies in the UNComtrade data for German imports and the mirror image data (UNComtrade sheet) .- Individual, country discrepancies between UNComtrade and Eurostat data for all yearsA: Reconciliation of trade statistics is a very interesting topic, where there are many questions and few exact answers. Your Excel spreadsheets are even more intriguing because of the comparison with the Eurostat data. For me, the fascinating observation is that the import totals (in terms of TONNES) of Rubber for 2001, 2002, and 2005 (for Germany) between UN Comtrade and Eurostat are equal, whereas the distribution is different.

The UN Statistics Division (UNSD) receives the trade data directly from the Statistical Office of Germany. Germany maintains two different trade datasets, namely based on the national concept of international trade statistics, which is sent to UNSD, and another based on the European Union (EU) concept of international trade statistics, which is sent to Eurostat. The main difference between these two concepts is the definition of the trading partner. In the national concept, Germany uses country of origin for imports. In the EU concept, it uses country of consignment. You can see this very well for the data with partners Netherlands and Belgium, which are huge partners in EU concept and minor partners in national concept. By contrast, partner Malaysia is important given national concept and less so in Eurostat concept.

You should not expect bilateral trade to be the same. Whereas on the imports side, it is possible to trace the country of origin, it is sometimes impossible to trace (or predict) the country of final destination when the goods leave a country. For the exporter in Malaysia, it may only be known at the time of exports that his shipment of Rubber will go to the port of Rotterdam in the Netherlands. In Rotterdam, this shipment could be split, and part of it may end up in Germany. So, if one wants to reconcile bilateral trade, you may need to investigate other flows as well. For instance, did Malaysia report large amounts of rubber trade to the Netherlands or Belgium? Could that explain the discrepancy?

Given that you are looking at the quantity and not value, we would need to carefully investigate if quantity information was provided by the reporting countries or if estimates had been made. We would suggest adding value comparisons to this kind of analysis for validation purposes, checking unit values simultaneously.

I do not have an answer to why there is a discrepancy in 2004 between UN Comtrade and Eurostat. We would need to investigate if any quantity was missing and estimated in the data processing, for instance. What is likely is that the Eurostat data have undergone more (or fewer) revisions than the UN Comtrade data. Germany usually sends us provisional data early and final (revised) data after about a year. So, we would have to look at when (in the 2004 case) you received the Eurostat data. 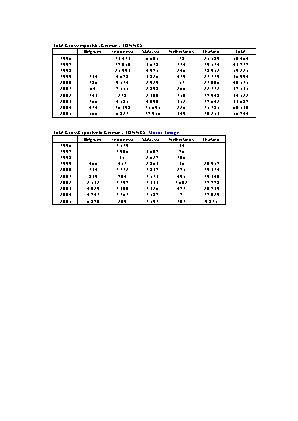