International Merchandise Trade Statistics: Concepts and Definitions 2010 (IMTS 2010) was adopted by the UN Statistical Commission in 2010 and contains the following recommendations regarding partner attribution: (a) in the case of imports, the country of origin should be recorded; (b) in the case of exports, the country of last known destination should be recorded.It is important to note that whereas on the imports side, compilers of trade statistics can trace the country of origin, it is sometimes impossible to trace(or predict) the country of final destination when the goods leave a country. IMTS 2010 clearly states that such partner attribution is not ideal. It explicitly warns that there are limitations to the use of data compiled on a country-of-origin basis; most notably, such an approach does not permit a symmetrical recording of the same trade transactions by the exporting country and the importing country and that this creates incomparability and detracts from the usefulness of such trade data for some types of economic analysis. The awareness of this limitation led the IMTS Expert Group to propose that country of consignment is also included in IMTS 2010 as a possible partner attribution.

There are other valid reasons why the reported exports of one country may not coincide with the reported imports of its partner country, such as:
• Imports are reported in CIF-type values, and exports are reported in FOB-type values;
• Time lag between exports and imports; e.g., goods leaving country A in 2012 might only reach country B in 2013;
• Goods passing through third countries;
• Goods entering Customs warehousing for several months;
• Goods being classified differently;
• Countries having different trade systems (General versus Special Trade System);
• Goods passing through industrial processing zones may or may not be recorded by the exporting country.

For further reading on this subject, see the following links (and attachments below):

With regards to asymmetries in trade in services, see below the relevant references:

World Bank Trade in Services Database and documentation This database includes data from 1985-2011 and tries to consolidate multiple sources of bilateral trade data in services using mirror techniques, including the OECD, Eurostat, UN, and IMF, to provide broader coverage developed and developing countries over time.

IMF Committee on Balance of Payments Statistics, 2004 International Trade in Services Statistics—Monitoring Progress on Implementation of the Manual and Assessing Data Quality

IMF Committee on Balance of Payments Statistics, 2007 Preliminary Investigations into Asymmetries in Bilateral Trade in Services Between the USA and the UK 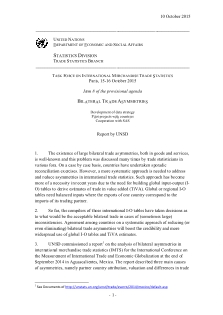 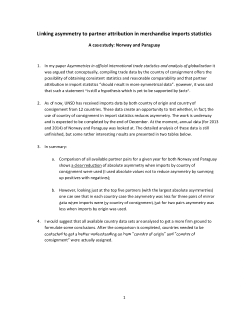 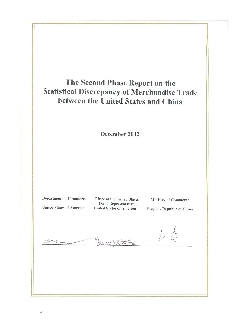 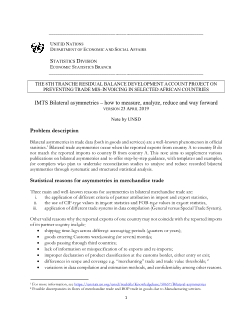