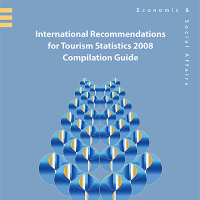 B.7. Other issues relevant to all forms of tourism

Expenditures by others for the visitor’s benefit

4.81.                  Tourism expenditure includes more than expenditure paid for by visitors out of their own resources: it also includes the purchase of goods and services on their behalf, by others (IRTS 2008, para. 4.5). This information is required not only by tourism statistics but also by the Balance of Payments, which should include (in theory) all gifts or payments made by a resident for the benefit of a non‑resident, or vice versa.

4.82.                  It must therefore be known whether visitors pay for their expenditures directly from their own resources or whether they are provided with certain items free of charge by an employer, say, or a host — particularly as regards, inter alia, international transportation from home, accommodation, meals and recreation.

4.83.                  Either of two situations may arise in tourism statistics, in connection with the place of residence of the party paying for the expenses, and they will need to be treated differently:

4.84.                  Such situations can arise frequently: particularly in the case of business trips, where enterprises invite clients or the press, for instance, to familiarize themselves with new products. Another example involves persons residing abroad, who are invited to spend time with the members of their family residing in the country of reference, and who usually do not themselves pay for most of their local expenses.

4.86.                  In some cases, it might be possible for visitors to provide estimates of those expenditures. For example, a visitor on a business trip whose employer has paid for transportation and the hotel, might know the amount paid, as he or she may have signed the corresponding bill. If so, these estimates should be reviewed for validation. If not, estimates will need to be made, if possible and as relevant, as part of the compilation process (because, even if unreported, these expenditures do have monetary value).

4.87.                  Such estimations might be necessary, in particular in the case of persons who stay at market accommodation, dine in restaurants or use air transportation but are not able to report values, with the result that those values are then considered unknown[1]. In all such cases, recordkeeping principles of the National Accounts should be followed, which means generally that estimating accommodation services when a guest shares the host’s dwelling are not estimated. In the case of food prepared in the host’s home, in theory estimates should be obtained, where possible, of the additional consumption generated by the visit (although few, if any, countries obtain such estimates).

Tourism expenditure classified in the National Accounts as intermediate consumption

6.220 Certain goods and   services used by enterprises do not enter directly into the process of production   itself but are consumed by employees working on that process. In such cases   it is necessary to decide whether the goods and services are intermediate   consumption or, alternatively, remuneration in kind of employees. In general,   when the goods or services are used by employees in their own time and at   their own discretion for the direct satisfaction of their needs or wants,   they constitute remuneration in kind. However, when employees are obliged to   use the goods or services in order to enable them to carry out their work,   they constitute intermediate consumption.

6.222 The following types   of goods and services provided to employees must be treated as part of   intermediate consumption: … e. Transportation and hotel services including   allowances for meals provided while the employee is travelling on business

4.89.                  However, in tourism statistics this is handled differently. As regards to tourism expenditure, IRTS 2008 (para. 4.5) is very clear about making no distinction between the macroeconomic concepts of intermediate consumption and final consumption, as long as the direct beneficiary of the expenditure is the visitor. The same holds true in the case of clients or suppliers directly invited on a trip by a business at the expense of the business.

4.90.              Nor is such a distinction made when it comes to setting up a TSA, since the production process by which goods and services are produced entails value added, irrespective of the economic use made of the output[2].

4.91.              The key point here is whether visitors use market accommodation and for how many overnights. In the case of visitors using a combination of different forms of accommodation during their stay in a country, the number of nights spent and the total value paid in each accommodation establishment must be reported. This should include all items invoiced on the bill including taxes, as well as tips (at least in theory).

4.92.              If non‑market accommodation has been used, then the visitor should be asked whether he or she (or the party) has stayed: (a) with family and friends at their home, vacation home or timeshare, with or without contributing to expenses (indicating the amount of any such contribution) or (b) in the visitor’s own vacation home or timeshare. Any amounts reported as contributing to expenses should not include gifts or payments to hosts or others not directly related to the services actually provided (which countries sometimes mistakenly treat this as a “counterpart” payment when in fact the supposed counterpart services provided are unrelated). In the case of visitors staying in their own vacation home or timeshare, a specific set of question should be asked so that the associated expenditure can be estimated (see chapt. VI, sect. B.2.4).

“Frequent flyer” benefits and other premiums

4.93.              Most airlines have loyalty rewards programmes, enabling their domestic and international customers to accumulate miles or points redeemable, e.g., for tickets or upgrades. Airlines may also permit miles accumulated to be redeemed, with other airlines or providers of other goods and services (such as hotels, car rental companies, credit card companies and retailers). How should the redemption of such rewards be recorded?

4.94.              Frequent flyer miles or points are treated neither as income accruing to the traveller (or credits against services as they are purchased) nor as liabilities for the issuing airlines – even though points are traded among the entities involved (including entities that redeem but do not issue such points), usually at a face value of about two United States cents per mile.

4.95.              There are two options for valuing transactions involving redeemed miles: (a) at book value, that is, the value that should have been paid for without the redeemed miles; or (b) at the actual monetary cost to the purchaser. More specifically:

The option is recommended whereby transactions involving miles are valued according to, and at the time of, monetary (cash) payments only. Thus, they are considered discounts.

4.97.              For purposes of measuring tourism expenditure, two types of consumer durables are identified: 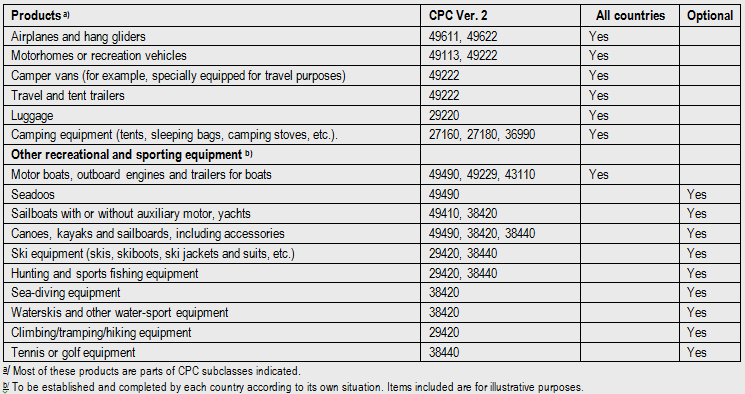 However,   given the variety of country characteristics, in terms of types of activities   that might be undertaken by individuals within their usual environment, and   activities offered to visitors, it is recommended that countries establish   their own lists of single‑purpose consumer durables.

Countries   that offer winter or aquatic activities that residents can enjoy regularly   within their usual environment, for example, may list different single‑purpose   consumer durables than those not offering such activities. For this reason,   the proposed list contains two different categories of tourism single‑purpose   consumer durables: those that seem to be common to all countries and those   that a country may wish to include owing to its particular characteristics.

To   facilitate this process, a category common to all countries is proposed,   namely, “Other recreational and sporting equipment”, which would allow each   country to indicate the products that reflect its own typical activities,   whether they be skis, water skis, tennis racquets or golf clubs.

4.99.              Expenditure on tourism single‑purpose consumer durables should always be included, irrespective of when this expenditure is made (TSA: RMF 2008, paras. 2.39–2.43). This represents an exception to the general rule that tourism expenditure should include expenditure occurring only for (i.e., before) or during a trip. This exception is made because, by definition these goods are used primarily, or entirely, for tourism purposes, and thus all purchases of such goods should be included in tourism expenditure. Because information on tourism expenditure is usually collected through sampling of visitors at the end of, or after they have completed their trip, it may be necessary to use a different methodology to collect the information on such expenditure, as expenditure on those goods after a trip is completed would not be included in such a survey. A possible methodology would entail sampling suppliers of such goods. Such surveys may already be conducted for National Accounts purposes. However, such surveys are used as sources, suppliers will likely provide only the value of their output, whereas what is required here is the retail value (i.e., how much those goods cost the visitors). In such cases, estimation of the retail value from the suppliers’ output value would require that adjustments be made.

4.100.              As regards, to multiple‑purpose consumer durables, only expenditure on such goods purchased during a trip should be included while this also represents an exception to the rule that expenditure incurred for (i.e., before) a trip should be included, the exception is recommended, as such goods are likely be used more for non‑tourism purposes after the trip is completed. These data, along with those on their other expenditure, can be collected by the recommended sample surveys of visitors at the end of, or after, their trip is completed.

4.101.              Some single‑purpose consumer durables may have a very high value. For tourism expenditure purposes, all such goods should be included irrespective of their cost. No cut‑off value should be set. However, National Accounts and Balance of Payments include those goods whose value is above the country’s customs threshold under merchandise trade and thus exclude them from travel spending. Consequently, for purposes of comparing tourism expenditure measurements with measurements in these frameworks, it is recommended that when collecting tourism expenditure, expenditure on these high‑value goods be identified separately (IRTS 2008, para. 4.36.(h)).

4.103.              Estimating the purchase of high unit value consumer durables on trips (e.g., a car or a high‑tech product) poses a few statistical difficulties. Such purchases are relatively rare but involve large expenditures when they do occur (see para. 4.101 above). In a sample survey context, when weighing individual records as representative of the population, such outliers could introduce significant swings in the estimated totals and would thus call for special treatment. It is therefore recommended that they be excluded in general from the estimation of averages, with the decision to include them to be made on a case‑by‑case basis.

[1] This points to the importance, in the questionnaire on expenditure, of making a clear distinction between a zero value (estimation = 0) and an unknown value that will subsequently need to be estimated using statistical methods.

[3] It should be noted that this reasoning with respect to goods does not apply to services. Hence, an imported service (most often related to transportation) is determined not to be part of tourism expenditure.